I’ve read blogs, seen videos, and heard audio from people around the world talking about these crazy horn-like sounds coming from the sky.  The sound is described as deafening and lasts for several minutes.  I’ve not touched on this in the past because most readers would blow it off as non-sense but now that well known news services such as the British tabloid The Daily Mail have taken notice, I figured it’s time to chime in.  Watch the video below to hear for yourself.

Daily Mail: Weird Noise Heard Across the Globe for Nearly a Decade Without Explaination

These sounds have resounded through the sky with the earliest recording coming out in 2008, a significant year according to Rabbi Jonathan Cahn (SEE ALSO- Video Post: Warnings from a Modern Day Prophet).  Some have tried to explain the sounds away as tectonic plates grinding (which to my knowledge can only be heard with specialized equipment that can penetrate dozens if not hundreds of miles of the Ear 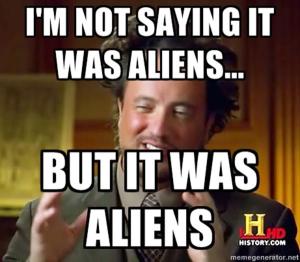 th’s crust and has not been heard by unaided human ears), atomospheric pressure changes (which we also don’t hear… at least not like this), planes, trains, or drilling equipment.  Still others are jumping to the fringe of HAARP weapons (here’s a well researched survey of the views on HAARP with fact checks), and of course aliens (because you know… aliens…)

“But Dan, what is your theory?”

I’m glad you asked.  If you’ve ever been to a symphony orchestra or played in a school band you should remember that before the conductor leads them in the arrangements the band warms up and tunes their instruments.  Listen to the sounds from the Daily Mail video again and compare it to the links above for airplane, train, and construction sounds; then compare it with this video:

To me, this sounds like the trumpets are warming up.  This may sound a little more End Times than you’re used to hearing on this blog, but it’s biblical:

“Then the seven angels who had the seven trumpets prepared to sound them.”     – Revelation 8:6

Preceeding that verse is the opening of the seventh seal and following it is the blowing of the seven trumpets.  This is just a thought and I could be wrong which is why it’s important for us to be aware of what the Scriptures say and to be watchful as Jesus commanded of the events unfolding in the world around us.

What do you think?  Share your thoughts in the comments below!