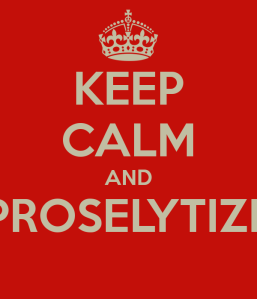 A good friend and I were having a conversation a few nights back and we somehow ended up on the topic of Christianity and proselytizing.  For anyone who doesn’t know, proselytizing is the act of trying to convert someone.  He isn’t a Christian and he’s been very open with me that Christians make him uncomfortable.  He feels as though he has to watch what he says around us, so having the candid talks that we’ve had has been a blessing to me and I hope to him as well.

Proselytize– Convert or attempt to convert (someone) from one religion, belief, or opinion to another.
(Source: Oxford Dictionary)

During our conversation we discussed the reason Christians try to convert others.  It was a good talk which I won’t give all of the details here and the conversation soon trailed off to another topic but I’ve continued to think about it and tonight the Lord brought to mind a video that my old pastor played during a sermon a few years back.  It’s a vlog from the notable Penn Jillette.  We may not agree with Penn on a lot of things but I truly appreciated his candour in this video.  His statement in the video is a testimony to the obedience of one humble man of God who was willing to do what the Holy Spirit told him to do.